Pipeline – there is a crack in everything

On a bitterly cold and blustery Friday we made a date with Neil to go and do a bit of crack repair. Unlike Leonard Cohen of whom I borrowed the title quote our crack didn’t let the light get in but rather let the water out and the field was rather muddy.

My bright idea of a clamp and a rubber strip  wasn’t quite good enough to stop the leak until Neil had the brighter idea of opening the valve at the old nursery to release the pressure in the pipe and hey presto, we could do our concrete bit, pictures tell the story:

The pipe with its bandage

Mud, glorious mud, me preparing the hole for the formwork.

Mixing concrete and smearing the pipe with cement

The foreman is happy with the result.

And lastly, shovelling the mud back in. Now we wait for it to set and hope for the best. Neil isn’t in the pictures because by the time he came back the job was done. We forgive him because he organized coffee with Wesley afterwards.

In amongst all the work fixing up the flatlet for the new tenant we still found time to zoot off to Van Stadens with all the materials, including a wooden box, to “quickly” pour some concrete around the offending leak. Ha, when we arrived we found that, in spite of the closed stopcock, the water was still running:

No way could we pour concrete in this cesspool, it would simply get washed away, so we started packing all our stuff into the car again when the owner of the property walked towards us with big steps, demanding what we were digging out. We assured him it was not one of his precious plants, Ellie would never do that, but instead were working on the water pipe. He didn’t even know there was such a thing and was most grateful to be alerted of its existence and we continued chatting for at least half an hour and he even offered his help if we ever needed assistance.

We didn’t quite know what to do next and returned to the reserve to see what the Wednesday crew was up to and were pleasantly surprised to see a good turnout all working hard transplanting Protea seedlings but it didn’t take too much convincing to make them stop for coffee and chatting, even more so when Rob and Marieke arrived as well. From that we took heart and decided to go back to the stopcock and see if we really couldn’t close it and on the way out met Wesley who also was in a chatty mood but eventually we made it to the stopcock and guess what, the owner of Whispering Pines was there and we made our acquaintance with him which meant another half hour interesting chat and finally managed to slow down the meter to a trickle by closing the stopcocks on both ends, still not enough though,

we will have to come back another day and first clamp a piece of inner tube around it.

Time for lunch, Ellie convinced me that Gibson’s pond was the ideal place and so it was:

except, guess what? Out came Mr Gibson with his three dogs for a chat so we really caught up on the local news today. Eventually he left and we could have lunch in peace, fortunately our new friend was very well behaved:

Back at home again we made arrangements with Neil to nail the leak on Friday afternoon.

Today we went to Van Stadens for pleasure, planning a little bit of work but mainly to do the cycle route we had been discussing. Got away a bit later than usual and we arrived at the reserve just in time for coffee and then we got our bikes in gear and cycled from the reserve to Falcon Rock, then on to the railway bridge, towards Thornhill and then back to the reserve via the Van Stadens pass, twenty-two fantastic kilometres even though I must admit that for me the pull back up the hill was a little more strenuous then I had bargained for.

The highest narrow gauge railway bridge in the world, getting a bit rusty, good views down and towards the N2 bridge.

Back at the reserve in time for lunch so we parked off at “the dell”, the pond we created last week, what a delightful spot and it was good to replenish the depleted resources.

Time for work and to check up on the leak. We met Francis White on the way so we caught up on the local news and his ideas with the farm before digging around the leak. Turns out to be a crack in the asbestos pipe, should be quite easy to fix with some tape and concrete so we four by foured along the very wet track to the stopcock to turn it off so the pipe can dry out a bit.

All good and well but when I checked on the meter it was still running! This can only mean that they have stuffed up the pipe under the road when they laid the new pipe last week. The never-ending job continues.

Well, last Sunday was the “official” switch on of the pipe, Neil did an excellent job giving our visitors a bit of background on the water supply and the trials and tribulations of the whole project. For the occasion I quickly switched the pipe so we had water running by the storage tanks.

Ellie baked a special cake for the occasion depicting the pipeline and the various points of interest and Jenny supplied the bubbly so we had a nice party afterwards.

As the pond was full and we did not want to waste the water we turned the valve off at the old nursery so we could find out how serious the water loss in the section between the two valves is, so yesterday, six days later we read the meter again and to our horror saw that we had used another 55 cubic meters. Fortunately it had also rained more than 100mm during the week and the dam is overflowing so no real harm done but we were keen to find where all this water had gone. We walked the entire length of the pipe with not a leak in sight so we were very puzzled until Ellie showed me the puddle by the railway which looked very much like a false alarm and on the way back across the meadow I happened to stumble upon the spot where the water bubbled out of the soil.

This of course means a little more of digging and sorting out, after the copious rain we do not have to do it too soon but we didn’t have the tools with us to switch the main valve off so it is quite important to get back there quite soon.

Pipeline – all the way

Another trip to Van Stadens, this time to connect the final piece of pipe to take us all the way to the storage tanks. We first had a look how the trench had been filled in, a rough job with the frontloader but at least it is covered. We wanted to give the pipe a good run before Sunday’s official switch-on but we couldn’t very well let the water flood the nursery so we led the pipe into the pond at the rockery, turned on the stopcock at the old nursery and then off to the main valve to turn that one on.

We first took a reading of the water meter so hopefully we can do another reading on Sunday and see how many litres we can get per day and then opened the valve and cleaned out the manhole and the rim so the cover fits properly again before zooting of to Gibson’s to collect all the bits and pieces of pipes etc that were littering the landscape, this is the result:

a trailer full of assorted asbestos pipes and such like, I guess this means a trip to the municipal dump sometime.

Back to the Reserve to see if the water was filling up our little dam and lo and behold, water rising: 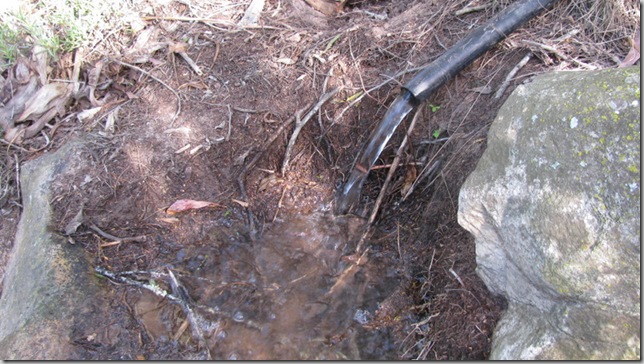 A small pool was forming, we noted the level on a rock and went and rolled out the remaining pipe in anticipation of Neil’s arrival, admired all the seedlings in the nursery, they are doing very well and decided it was time for lunch. What a glorious day it was, out of the wind and in the sun, reluctantly we went to the old nursery to install the manhole cover we had retrieved, got a phone call from Neil saying he had arrived, installed the pipe in the trench and then just sat around the pond with big grins on our faces admiring the result of so many weeks of toil.

It was filling up fast, soon the rock will be submerged, lots of banter about skinny dipping but no one was foolhardy enough so we left it to fill overnight. On the way out we popped into Wesley’s office though to warn him that the pond might overflow and that he could close the stopcock by the old nursery if he wanted. then, one last look….

and back home again.