At last the rebuilding of the picnic bench out of the remnants of the old ones was finished in my workshop and, rather than re-assembling it on a Wednesday with all the accompanying distractions, we decided to go out on Saturday and take our time about it. I had marked out all the pieces so it would be a cinch to put it back together and, with a few minor hitches, so it turned out to be. 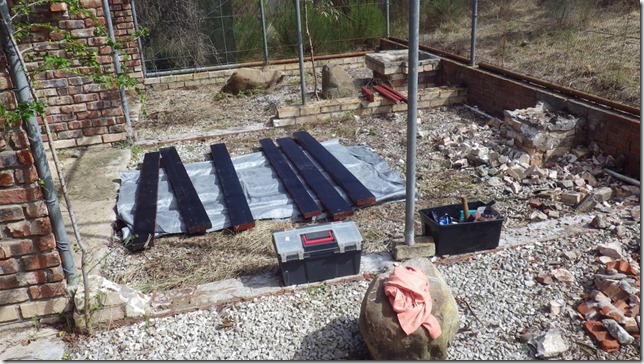 You can see someone had wielded the big hammer again so, while I puzzled out the pieces Ellie got stuck into clearing the rubble. We decided to put the bench in the seating area away from the smoky fire, we’ll have to see if that is a practical solution. Nearly finished, just the seats to be bolted on. In the old days these benches were built to last and I added the cross members for extra measure so hopefully a few more years were added to its life.

Here we sit with satisfied smiles on our faces after a job well done. Time to go for a walk in an area we don’t often visit as generally we just drive the road to the start of the Forest Walk but there is lots to be discovered in the patch of fynbos along this road including this lovely dam. 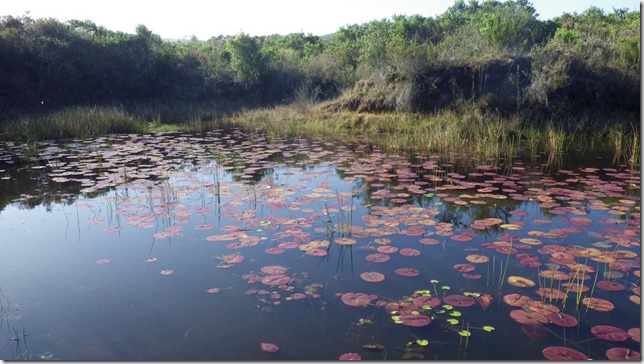 As we already have a Lilly Pond we named this one the Nymph Pond due to the abundance of Nymphea not, unfortunately, due to the presence of some mythological handsome maidens.

Lastly we strolled through the arboretum and distributed some coffee grinds in the vain hope to discourage the porcupines and admired this lovely patch of bulbs the have left alone so far. Tony must have been quite frustrated as we found that he had been swinging a sledgehammer with abandon in the old aviary and knocked a layer of bricks off all the internal  walls and even started on one of the very solidly built birdbaths. The result of course was the place strewn with rubble so we kindly collected it and made a large heap outside to be cleared away. Pottaman showed us where the connection for the water is buried so we can put a tap by the braai and Ellie made use of the opportunity to show him where to mow for the extension for the Fynbos Ramble. Hopefully he will now stop mowing in rows between the Proteas and give it a more natural look.

The alien buster team of Rob, Keith and Cathy ringbarked more Bluegums, nearly finished now and then they can concentrate on seedlings again of which there are plenty. Rob will give a course next Tuesday to the Van Stadens staff how to deal with aliens using poppers and/or herbicides rather than their current methods of slash and coppice. I keep on trying to find the optimum mist setting and am getting close I think. 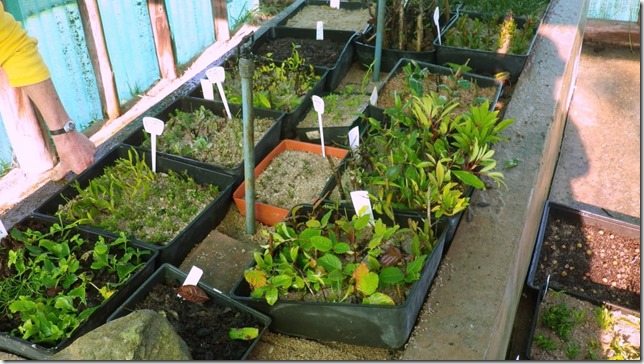 It is still very dry in the Reserve, while Ellie braved the cold water I weeded a bit on the Aloe koppie but the soil was very hard and it looks like it can do with a lot more compost and mulch.

Vee alerted us to a special Protea behind the Dell so we went to photograph this Protea scolymocephala, not from the Eastern Cape, pretty none the less. The Open Day with plant sale is getting close, still lots to do with few hands to do it, where is everybody?

On Monday we climbed the Van Stadens mountain by 4×4 (aren’t we energetic) and started the search for the elusive Erica sagittata in the area to the south of the antennae park on top. Even though we saw plenty of interesting Ericas in the area Wesley had indicated a few years ago we did not spot the one we were looking for so then we followed the trail from there to Ladyslipper and were very happy when Ellie spotted a specimen near the paraglider jump-off spot. 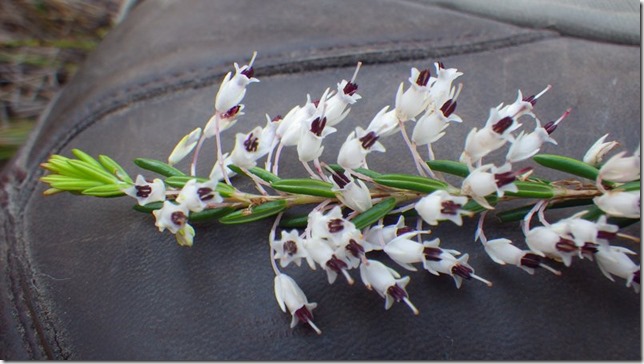 It was quite windy and the only way to get a semi-decent picture was to break off a small piece and photograph it with a boot as a background. Needless to say we took the twig and are now trying to root it.

We also discovered some fauna on the shrub, perfectly camouflaged. As we got close to the path coming up from Falcon Rock we were most surprised to hear another group coming up and even more surprised when it turned out to be Goodman, Vee, Noxi and Samantha taking up a group of Boardwalk staff doing a teambuilding thing. We had a good chinwag, they turned back and we dropped down into the valley behind Ladyslipper and up to the other side to the car for a well deserved lunch.

The intervening week gave us some time to crystallize some ideas about how best to shape the braai area and make it a little more inviting than just a cleared out rusty old aviary. The idea is to separate the sitting area from the fire and smoke area and, as the site is quite exposed to the sun, to cover the seating area with shade cloth. The old bird baths make a good base for a fire but the ones on the west side are too close to the vegetation so these will be demolished. Also, the dividing walls between the sections are quite a pain to step over so Tony promised to chop a layer of bricks off those so the old people like the Wednesday walkers won’t trip over them.

We cleared out all the accumulated rubbish, including an old windscreen smashed into a thousand pieces and took it home to go into our weekly dirt bags and got a test fire going. The greenhouse has some issues with the sprinkler system, the sprinkler heads clog up and the cone-shaped spray turns into a downward jet, it needs some redesign. The success of the misting house set us thinking to rather use misting jets and to this and we bought one to try it out and indeed it gives a much better coverage. The idea is now to equip the shelves underneath the new, clear roof section with misters to use on the seed trays for which there is no more space in the misting house. This means though that we will have to buy another timer to regulate this section of the greenhouse separately.

Finally the bench is taking shape. The wood is difficult to work with due to the years of dirt and grime imbedded in the wood causing blunt tools in no time but so far it looks promising. Wouldn’t it be nice to have this kind of paving in the braai area.

Various groups visiting the Reserve have expressed the desire to be able to braai in the Reserve and we have been asked to come up with suggestions how the old aviary could be used. The aviary was used a long time ago to rehabilitate poisoned or injured raptors and had turned into a real eyesore overgrown with weeds and rusty wire and other rubbish collected over time. 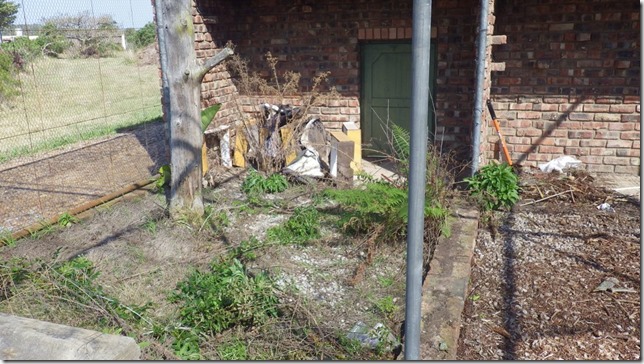 We decided to keep the peripheral fence but remove all internal partitions so Jackson went ahead and used his wire cutters to good effect. The old rusty mesh stayed behind but the useable pieces mysteriously disappeared, probably to construct chicken coops elsewhere. Old tree stumps, bramble and ferns were removed and it already looks fairly promising.

We added more re-potted plants to the shade house, by now Ellie must have shuttled more than a thousand plants between the nursery and home to sort out and we keep on declaring the shade house full but somehow still manage to find an empty spot for more. 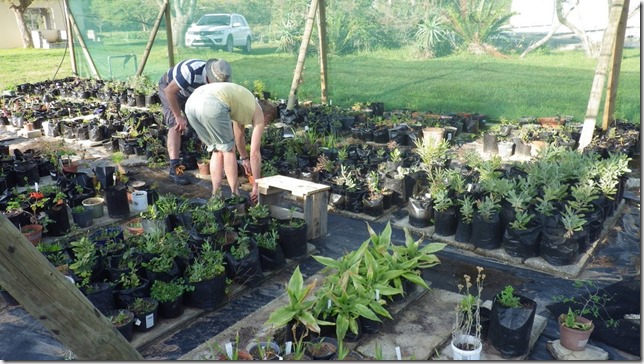 Lastly I took the last of the picnic bench skeletons apart and somehow managed to injure my other leg on a protruding bolt. I should now have enough would to salvage one complete bench. 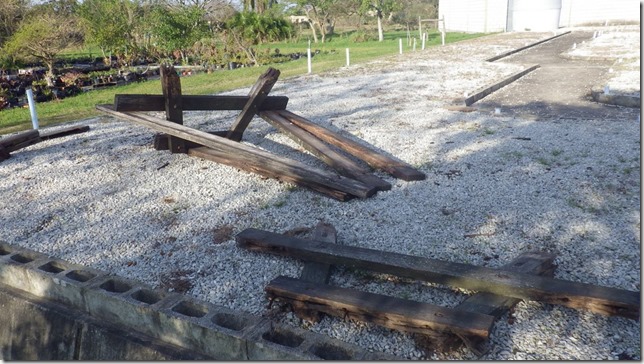 Just an update as the whole story with our water supply has not been conducive to writing.

Our workparty last Saturday predictably did not attract a whole bunch of people. We expected that and did not organize much work, in fact the first hour or so was spent just chatting and after that some weeding and moving of plants in the nursery was done. The greenhouse looks rather empty now, we will have plenty of space once the sprays are sorted out. We will replace some of the sprays with misting heads to see if that will improve coverage. It works well in the misting house so it is worth a try, the only problem is that they are hard to come by.

The latest ‘mission impossible’ is the fixing of another picnic table. The idea is to make one out of the wood salvaged from this lot.

Underneath the grime and algae of many years of service the wood is still remarkably sound so, with a lot of work, it might be possible. Neil got stuck into dismantling them and when he left I carried on only to cut my leg quite badly on a protruding bolt.

In the early afternoon Brenton of geocaching fame visited as he plans to hold a geocaching event at the Reserve on the 24th of September. He gave us an introduction of the various types of geocaches and Ellie and Rob showed him around the Reserve to scout for possible locations and also some tasks for them to do such as hacking, moving rocks and planting trees. Hopefully the event will do well. 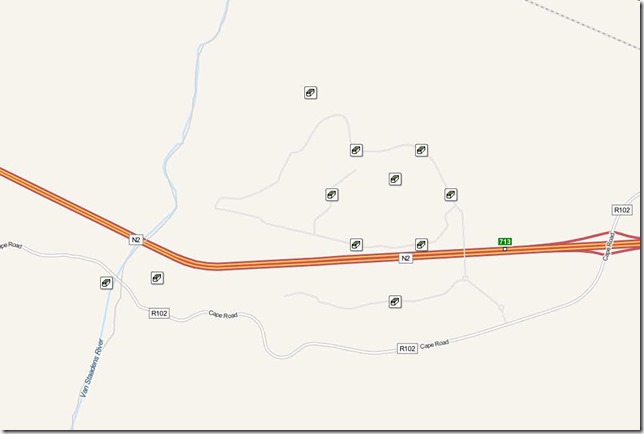 There are actually already quite a few caches in the Reserve. All info at www.geocaching.com

Finally, on Wednesday this week. instead of our usual trip to Van Stadens we collected discarded potting soil from the municipal nursery, two trips with full trailer and more bags in the back of the car left us with quite a bit of soil.