No time for blogging lately, it has been heads down to get everything ready for the Open Day. With a full program of Trail Running, Mountain Biking, Plant Sale, Guided Walks and Stalls there was a lot to be organized. Poor Ellie had to answer stacks of phone calls after the newspaper notices and especially the article in Die Burger, the good thing is though that it brought a lot of new people to the event.

Thanks to a lot of teamwork the Nursery looked very good, moving the plants from the shade house and the greenhouse to the platform was a lot of wheelbarrowing (new word) but it makes for a much better display.

Amazing how many people in PE don’t know where the reserve is and need directions, thankfully, thanks to Neil’s work, we had spiffy new banners to put along the road so I don’t think anyone got lost.

The week before the Open Day the reserve was buzzing with activity (when it wasn’t raining), lots of mowing, some work on the Xhosa huts and marking the trails. It helped a lot this year that only the trails were mown and not the whole field or rows between Proteas as it was much easier for the runners and cyclists to follow the paths. The plant sale was supposed to start at 9:00 but as usual the eager people arrived early and it was impossible to keep them out without causing major unhappiness. It actually helped to keep a steady stream going so our helpers with the wheelbarrows delivering the plants to the cars did not get overloaded. Also, the colour coding of the plants worked very well as it was much quicker at the paypoint. Hive of activity in the the nursery 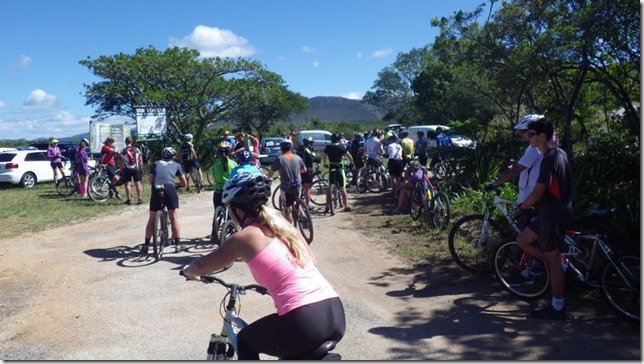 At ten it was the turn of the mountain bikers to explore the reserve and to enjoy the paths winding through the fynbos, It was great to see them taking it easy (it wasn’t a race) and enjoy the many Proteas etc. in flower.

It was also very rewarding to see so many kids out there as we laid out our tracks to be family oriented and leave the strenuous and technical routes to the other areas around us.

The official close of the day was at 1PM, unofficially there were still many people lingering on while we tidied up and still sold a few plants to some of the late-comers before winding down and looking back on a very successful day, now the job of replenishing the stock starts.

Due to three days of persistent rain we shifted our working day to Thursday and, oh boy, a working day it was.

First though a meeting in the Flower House with Goodman to make sure we have all our ducks in a row for the Open Day, good to see that the girls had a go at naming the specimens correctly. We are happy with the rain, just hope that it will be dry enough before the Open Day to grade the cycling tracks.

Keith and Rob went and staked the trees that were planted on the geocaching day last Wednesday while I had a go at mounting the flower poster on the side of the potting shed and Ellie and Cathy started to sort out the shade house and paint more dots.

For some reason everybody felt like early coffee and then we got stuck into moving bags and bags and bags from the shade house to the platform, I hope they’ll all get sold because I certainly don’t feel like moving them back. The result is very encouraging though. We kept it up till 3 o’clock and then went and admired Tony’s and his crew’s handiwork at the Xhosa huts and were most impressed with the progress, all the old thatching has been removed, the inside cleaned out and even the hedge around the kraal is being spruced up. The old thatching is used to burn the Strelizia stumps, excellent idea. With lots of imagination it looks like some modern sculpture with desperate arms reaching out for help against man’s destruction of the planet. We checked the trees and it looks like they have transplanted well.

Now for Sunday to finish the preparation for the sale.

As far as the water supply is concerned we now have no more water from our pipe line coming in and the float in the water tank has disintegrated. Hopefully we can get to that soon after the Open Day on the 12th.