It was still necessary to do some more work on the Nymph trail and try to convince Sisanie (we have always called him Pottaman but apparently that was wrong) to mow the remaining sections.

While on the trail we noticed the Dodda was flowering. We also continued cleaning the pine tree up.

As promised I took a few pics of the bird hide. Still a work in progress by the looks of it as Neil has added a curtain to block out the backlight from the door.

It is certainly lovely to sit there and enjoy the view even if you are not a birder like myself who cannot tell a crow from an ostrich. 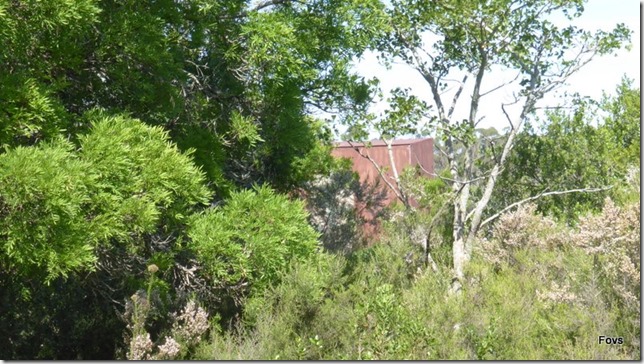 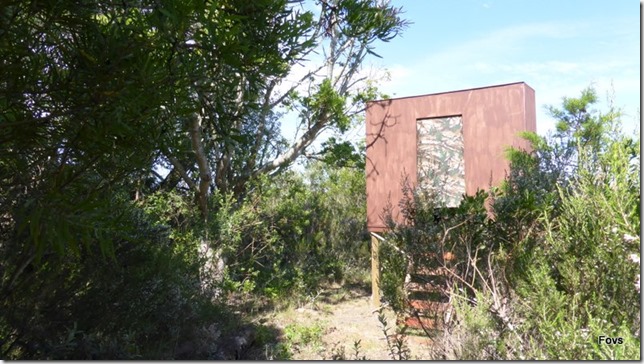 Another nice view is from the aloe/cycad patch, kind of mysterious looking. Now if we only could allow ourselves the time to sit there for a good while instead of work, work, work.

Further this Wednesday a very much needed cleanout of the misting house was done, which prompted much planting and weeding of the shade house. Soon we also need to start moving things from there into the general nursery and do lots of weeding in there as well. After tea it was time for Keith and I to do some more chain sawing to clean up the pine tree while the ladies did some planting and much needed weeding in the entrance circle. Tough going in the heat and the horseflies were still a menace. I can’t remember them ever being that bad for such a long time.

Pottaman in the meanwhile did some more flattening of the cycle tracks, we need to ride it ourselves soon to see what it is like now and we bribed him with a chocolate cake to make haste with the mowing of the sections of the new trail. We’ll see next week whether it has worked.

We also checked up on the blue gums, there is some resprouting, nothing we can’t control though. Hopefully some of the stacks can be burned soon to clean some of the branches up.

Lastly we also found this strange stick insect in the arboretum I see it is nearly a month ago since I last blogged, since then quite a few things have happened. Not least of those is the building of a bird hide at the edge of the Arboretum. I’m ashamed that I have not yet taken a photo of the structure, an omission which will surely be corrected with the next blog.

The cutting down of the big aliens has been quite controversial with some folk. The ignorance about aliens and the effect on the environment is astonishing, they would gladly see the reserve overrun by hakea, blue gums, pines, bryophyllums etc. and not lift a finger to prevent it. Goodman is actually quite worried about aliens and is planning a controlled burning program to try and keep the indigenous flora from being wiped out.

In the meantime we have merrily continued cutting the Nymph trail, it took a bit of intentional meandering to end up at the right spot on the dam wall of the Lilly Pond but we did: 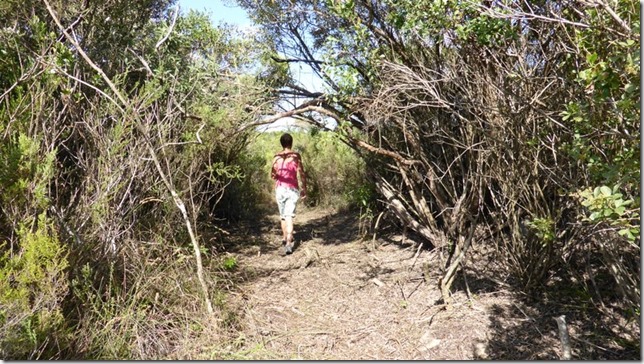 It took a few sessions to lead the path from the Lilly Pond to the old explosives store and beyond and we finished it during the early March monthly meeting. Since then we spoke nicely to Pottaman to mow the remainder of the old tracks and we should end up with quite a nice circular walk.

It is difficult to photograph a winding path, hopefully the above pics will give some idea. Trail Adventures had a sneak preview of the trail and Sheena liked it so much that she organized a training run for the 12th of April. Pottaman also had a go at levelling some of the cycling trails, it definitely did work, now it remains to be seen if they will be used a little more.

The Voetsac club came out for a walk and afterwards used the braai, this inspired me to organize a small family get-together there for my birthday which was most enjoyable. With all the activities on the go one would almost forget the botanical side of things, not so, we took time out to go and admire the gorgeous Cyrtanthus staadensis along the River Walk. 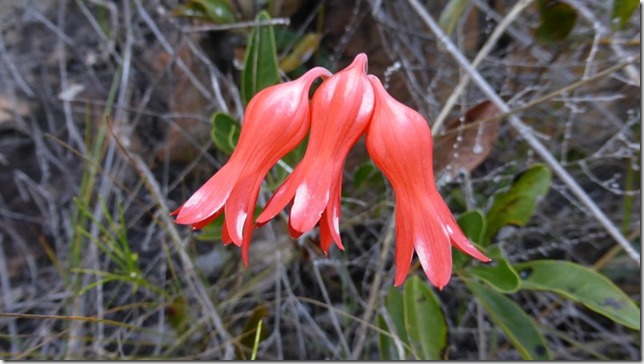 In the coming weeks we will steadily work away all the cut down logs and branches and make sure that the thirty-plus newly planted trees survive. We also desperately need to do some work in the nursery as the weeds are thriving and the pigs have been digging, if only the naysayers and critics would contribute in a positive way and come and lend a helping hand.