I wish we could have this more often, 67 minutes of community service for Mandela day brought a group of Woodridge students to the Reserve and we got one group to work attacking the Podylarias under Rob’s supervision and another with Ellie and I creating some more paths in the arboretum.

First they were welcomed and told what we expected:

We were impressed with the enthusiasm and hard work, even the teacher got involved and some hefty Keurbooms were taken to the compost heap.

Pity the 67 minutes ended way too soon, if only we could get that kind of help more often from the members on our Facebook group.

Well well, we were most pleasantly surprised when we arrived at the Reserve and found everybody getting prepared for a controlled burn. Never mind that it was a different area than the plan put out earlier this year bur firebreaks were cut and soon the fires were lit.

Note the keurbooms in the background, it would be good to give the fynbos a chance to recover.

We had a good vantage point from the picnic site and the columns of smoke were quite impressive.

Working for Fire did their bit as well and everything looked very well organised.

Unfortunately, a well meaning visitor phoned the fire brigade and when the fire truck arrived  they made a big issue of Goodman not having organized a permit and forced the staff to stop the burn. A great pity because the weather was ideal, everything under control and it would have benefitted the Reserve immensely.

I don’t think this tortoise was in any danger but I “rescued” it anyway and put it at a safe distance.

Ellie proceeded to clean up around the Brabejam while I put my new wedges to the test and cut a large tree trunk in sections to be used at some stage on the wet section of the Fynbos Ramble. With all the rain we are having it is too wet to do now.

Over the past few weeks we had prepared some logs to attach the trail markers to and today we set out to place them at the appropriate places along the Nymph trail. Hopefully we won’t have a fire too soon and, if it would be a controlled fire, we live in hope that the markers would be removed first.

We also put rocks underneath the logs to prevent them from rotting too soon.

Most of them were not too far from the trailer but some had to be carried for a fair distance (thanks Keith). That led us past the Lilly Pond where these yellow billed ducks were floating sedately…

For a change the sugarbirds were fairly tame so I could take a reasonable photo. 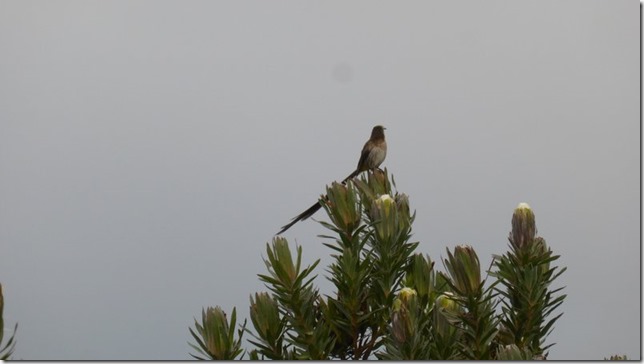 In the afternoon we also distributed some more logs to the 3Dam trail and found out we don’t have enough signs so we will have to go for a second print.