Tony to the rescue.

Went out today with the sole purpose of stringing the wires for the windbreak. I had made a nifty gadget to tighten the wires and it worked so well it lifted the poles out of the ground so it turned out to be a bit of a disaster. It did not make me a happy chappie. The whole thing was flopping around as well because the droppers also did not give enough support.

I explained the problem to Tony and he suggested to fashion some stay wires from a metal pole and some wire. So we hunted through the stores and we found one, cut it in half with their ancient and dangerous angle grinder and made the poles solid again but the droppers were still no good.

We then found a piece of wood in the FOVS room and fashioned a support out of it and suddenly the problem was solved. Felt a whole lot better after that.

After lunch we checked on the brambles by the bird hide and discovered that the poison had no effect at all so we need something more potent. We then took our frustration out on some more clearing of the path.

Moving Proteas to the platform before very Open Day is a schlepp and it would be much easier to move them earlier and also straight from the shade house.

The first one was solved a little while ago when the I managed to open the rusted stopcock of the water supply to the sprinklers on the platform but the second needed some more work.

With a bit of lateral thinking we came to a solution making good use of discarded materials such as the poles from the old bird hide, the metal pipes from the burnt rondavel and the old shade cloth from the first shade house extension.

Last week the poles were planted and, thanks to the Woodridge guys carrying the pipes to the nursery, we could make some supports today and concrete them in. Looks a bit bent and twisted, good metaphor for Fovs, but it will do the trick, the next step will be to string some wires and attach the shade cloth.

After tea Ellie treated the misting house with some disinfectant as we haven’t had good rooting results lately and she discovered that the sheeting on one side was terribly loose and ready to blow off so that needed some emergency repairs. It looks a bit patchy now, too bad.

After lunch we still spent some time clearing the bird hide path a bit more and then had good intentions to do some more in the arboretum but the weather turned rather unpleasant so we laughed that off.

A mixed group from Woodridge and Eton College came to give us a hand today with some of the things we would have liked to do but didn’t have time for.

We split them in three groups of eight.

Rob and Keith were in charge of the Podylaria assault. Ellie took the Eton rugby team to massacre Strelizia nicolai and Cathy and I gave Pelargonium pruning lessons at the entrance circle.

Most of the young men rose to the occasion and we even managed to get them to carry metal pipes from the Arboretum to the nursery to be used in the wind break and to pull up the plastic sheeting on the ramble which had gone very tatty.

When they were all gone we still collected some Protea seedlings in the burnt area, the collection is growing.

The past few months I have not only been busy building the bird hide but also got some more grey hairs programming an interface for our weather station to the internet. Last week it was installed in the Fovs room and today it was time to mount it outside. So far it is working well and we are building up a database so we can plot various graphs at a later stage.

There were also some finishing touches to be done on the hide. Rob’s bird poster went up, it even got dainty little feet… A door sill was added to protect the floor and we hauled some heavy rocks to make the steps a little sturdier.

In the afternoon we also started on the windbreak on the platform so we will be able to move the Proteas out of the shade house a bit sooner for the Open Day.

Ellie decided a while ago that it would be a good idea to fix the ride on mower which has been languishing for about five years in the shed with a broken engine. She used her charms on the various committee members to get them to agree and this is the result: Tony does not have to push the domestic-size petrol lawnmower anymore to mow the vast expanses around the various buildings and the nursery. We have been quite vocal to make everybody understand that the mower has to be looked after and that we will inspect from time to time.

Part of the overall plan with the bird hide was also to make a path to connect the hide with the Nymph trail and this was duly done. It runs from the Strelizia to below the dam wall. It was very overgrown so it needs a bit more work to neaten it up but at least we could stand and admire the result so far. 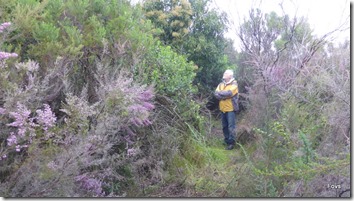 The Ericas are beautiful there, there is also quite a bad bramble infestation.

Finally all the pieces of the hide were ready to be taken to the Reserve and assembled. First though we had to choose a place and after much debate we settled on the dam wall near the Lily Pond as from there one has very good all round views and there are even some birds which is what a bird hide is supposed to be for.

Doing the foundation proved to be hard work as the dam wall is made up of very dense clay where you can hardly get a spade in and I must admit that it was easier to cut the poles to length than it was to dig them in deeper. Finally we had the eight poles in, put the base on and Ellie tested it for strength. It passed with flying colours.

We already had taken some pieces and kept them safe overnight.

The big day arrived and it was quite a carry from where we parked the trailer to get all the pieces to the site and then the exciting job of putting it all together could begin.

Fortunately it all fitted without a hitch. Putting it all together first at home definitely paid off,

The roof was a bit of a struggle but all worthwhile when at last we could stand inside and admire the view. 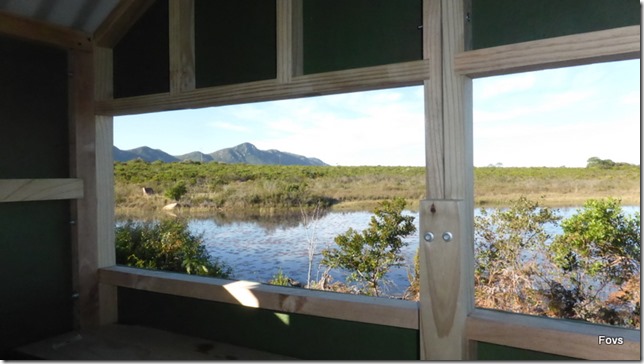 I was particularly pleased with the way the roof construction worked out. 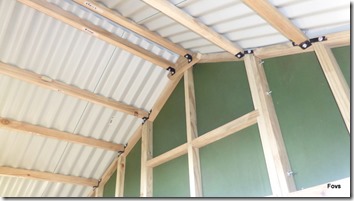 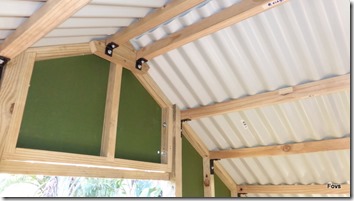 Of course now we had to walk around the dam and admire the hide from all positions. 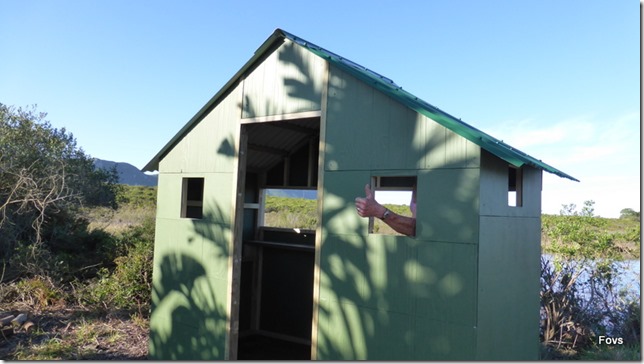 During the course of the next few weeks some finishing touches were made such as varnishing exposed parts, hanging doors, fixing benches etc. Then it was time to show it to the masses and hopefully it will be used for its intended purpose. 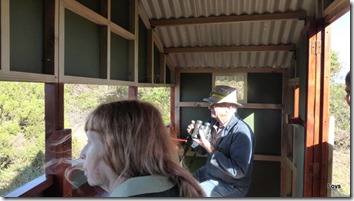 May it long be enjoyed and, unlike the previous one, be spared from fire.

Bird hide–Part 1 – from the ashes

The last few postings have been a bit short on detail about the bird hide so I thought it might be nice to put it all together even though some of it has been covered before.

It all started on the 6th of March when we went to the Arboretum and saw the devastation the extensive fire had caused to all our hard work there, particularly the bird hide Neil had spent many hours building. 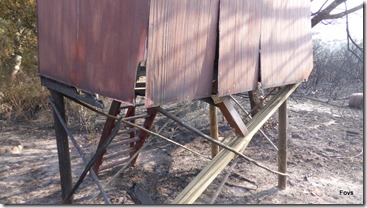 The first reaction of course was to abandon the whole project, especially because Goodman and co. were very pleased with the fire and had no empathy at all with us feeling disappointed, but soon we made plans to rebuild. The first stage was to clean up the mess and see what could be salvaged.

The sheets were badly damaged and it was quite a challenge to envisage a new hide from these pieces:

With the help of Excel and some cad though we figured out the best shape and layout and soon the construction was underway. Handy to have a spare room. People were wondering how we could manage to get the hide out of the door and to the Reserve.

The puzzle pieces were quite small so it needed quite a lattice work to support it all.

What we did need however was a new roof so we bought some corrugated iron at Algoa Steel. The original brown did not quite match the roof and, seeing we had to paint it anyway, decided on some green roofing paint for the sides. Ellie did a great job wielding the paint roller.

After all the bird hide activities of the past few weeks it was now time to get back to business as usual First we had wanted to use the monthly meeting to bring some order into the nursery but the weather made that quite an unpleasant option with a cold breeze blowing across the field. A better option was to make everybody feel part of the bird hide project by opening up a circular path along the dam wall from the Forest track to the hide. Unfortunately I was too busy wielding the brush cutter to take many photographs of the working party. 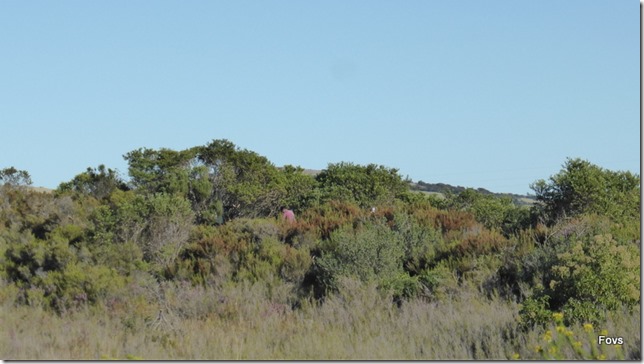 No much to see but there is a glimpse of Ellie and Cathy there somewhere.

By teatime the weather had improved considerably and we had a pleasant change of scenery by having our tea on the lawn in front of the center.

When everybody had left we still went for a short walk and were treated by a nice display of some sugarbirds.