It was tempting to postpone our weekly Wednesday workday to the next day as bergwinds with temperatures of over 36 were forecast but there were too many things to attend to.

First of all our weather station had stopped communicating since our last visit on Friday and, believe it or not, it was our kettle tripping the earth leakage rather than some programming bug. Perhaps we should go solar at some stage.

As we arrived Rob told us that there was some problem with the water supply as the sprinkler had only run for a short while. Our first reaction was “not again!” but a simple check with thumb on tap revealed that the pressure was very low. Jenny had also arrived to water the trees in arboretum, it is by now quite a job with all the newly planted trees especially with hosepipes and low pressure.

I preferred to do some weeding in the shade while Ellie went on a hike along the pipeline to see if she could find anything and, sure enough, she found quite a fountain on Neville’s property where the pipe had been gnawed through by what only could have been a porcupine. The only positives were that it provided some welcome relief from the heat and it made a nice rainbow.

We decided to try the repair only when Jenny had finished so after lunch we trekked back armed with the necessary tools and a join. By now it has become routine and it was fixed in no time. In between Ellie and Rob cut down some undesirables on the islands in the Tilapia dam where the trees need some breathing space and they also found that one of the Cyclopia seeds has germinated and already half a meter tall. On wading back they also saw a large Tilapia so some are not only surviving but thriving. We have found that quite a few people have driven into the Arboretum which is not too good for the things we’ve planted so we have made it a little more difficult by putting a wire across the entrance.

Back in the nursery we put on the sprinklers again to give everything a good soaking and survived the temperature dropping from 37 to 20 degrees within half an hour, quite extraordinary.

To top it all off, on the way home we had a flat trailer tire with hardly any load, lucky it wasn’t on Friday when we carried the big roll.

One of the issues for the Friends of Van Stadens is that we get very little feedback about the usefulness of the various things we do at the Reserve, be it laying on a trail, putting up a bench, clearing aliens etc.

Therefore it was very good to see on the hiking club’s Facebook page how they had enjoyed Sunday’s outing and had made use of the various facilities.

They started out doing the entire trail making use of the Link Trail we’ve laid on and, after the Forest Walk section turned into the Nymph Trail. 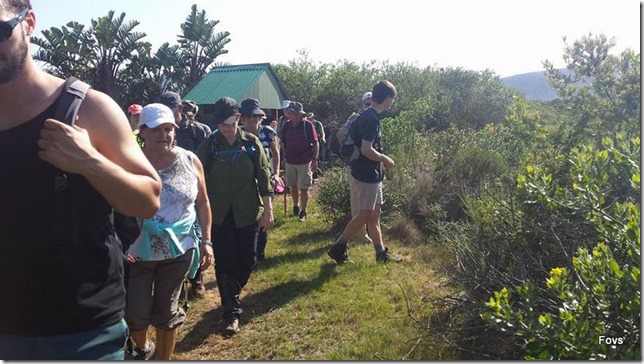 Here they walk along our newly opened up Drongo Trail to the bird hide. 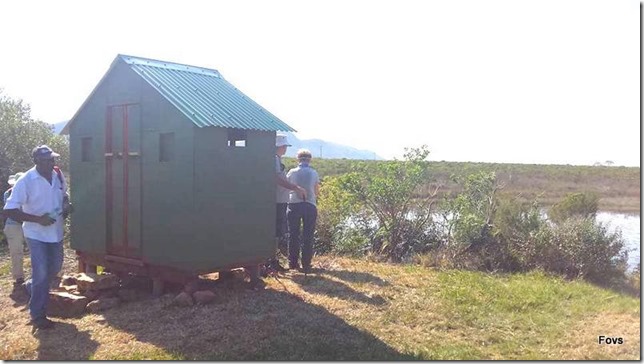 The hide itself and it’s situation with an all-round view was much admired. And here they had a relaxing braai afterward using the braai area we were instrumental in providing.

For a while we have been interested in getting some weedguard rather than plastic for the nursery because the plastic doesn’t last very long so when Neil managed to get some at a very good price we jumped at at.

Slight hitch, we had to collect it straight away and off we went with the trailer in tow. We were in for a bit of a shock though as the roll was much bigger and heavier than we bargained for. Nevertheless, the forklift put it on the trailer and it didn’t sag too badly and the tires looked all right so we decided to give it a go. Going not more than 80 on the N2 we managed to get safely to the Reserve and now we needed to get it off with just the two of us and no forklift and I came up with clever ideas of using a shelf as a roll off ramp but you can see Ellie’s much better solution in the picture.

It landed with quite a thud and all we could do was to roll it alongside the Fovs room as it was way too unmanageable for us to put inside. We were also pleasantly surprised that Tony and/or Speelman had kept their word and removed all the poles from the spray area outside the shade house. It looks so much better already and hopefully I’ll get some help taking the vibracrete out in due course.

Never a dull moment, this time it was a geocaching event organized by Wikkelgat, I love the names these funny people give themselves. As part of the worldwide Geocaching day they had hidden a few new caches but the main reason was to socialise and have a braai and what better way to socialize than planting some trees and pulling out some weeds. Here is the whole crew, no alien plant would be safe if we had this support every week. 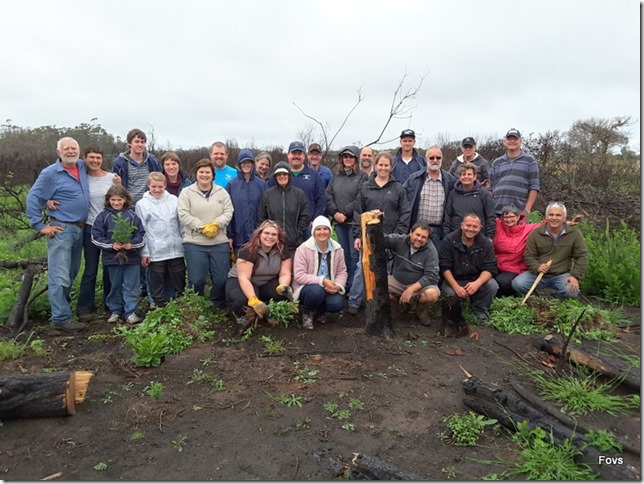 Afterwards we did some botanizing and were amazed at the size of some of the Pelargoniums on the site where once the blue gums had been.

We checked up on the P.schizopetalum by the Lookout picnic site and it looks like it could flower soon. Unfortunately the specimen near the bird hide has suffered from the spraying of weedkiller on the path and looks rather sick. We go a nice surprise when we popped in at the bird hide and were treated to a display by the striped mouse right in front of the hide. The other exciting activities lately such as bird hide, water pipe and nursery have taken the focus a bit away from the arboretum so today we spent some time there. Thankfully Jenny is making sure that the new trees do not lack water but to keep on top of the undesirables coming up after the fire is quite something else. The keurbooms and podalyrias are as thick as hairs on a dogs back and a few hours per week are just not enough to keep them under control.

It was good to sea a group of home schooling kids and their moms getting in touch with nature, visiting the unburnt section of the arboretum and then doing the Forest Walk. After tea Ellie, Cathy and Keith carried on with the latest project of beautifying the area around the toilets while I did some much needed weeding in the shade house and Rob varnished his bench.

Lastly I made a quick trip to the bird hide to pretty up the sign. As mentioned previously Rob discovered a leak in our water supply a few weeks ago but as the water was still running and there were tons of other things to do I tried to ignore it. However when we inspected it last weekend it was obvious that it had been running for quite a while. We also found out that most likely it had been caused by the chicken farmer neighbour when he put up the fence but he has kept rather quiet.

On Tuesday we went with out usual Wednesday crew plus Neil to see what we could do and we dug various holes to prepare to replace the last section of asbestos pipe with our black pipe. 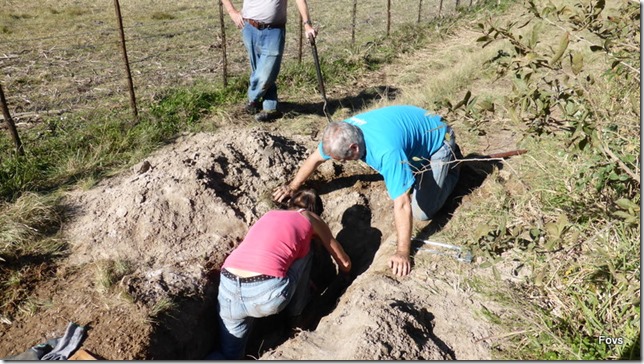 Here we are near the manhole with the stopcock and air valve. We found that we needed an adaptor and another roll of pipe so during the remainder of the week this was bought and On Saturday we returned to put it all together. We put our own stopcock in as well as the old one does not close properly anymore.

Our preparation paid off as everything went very smoothly and we connected the new sections of pipe, filled the holes and we have water again! We even had enough time left to carry the new bench to the arboretum and try it out. 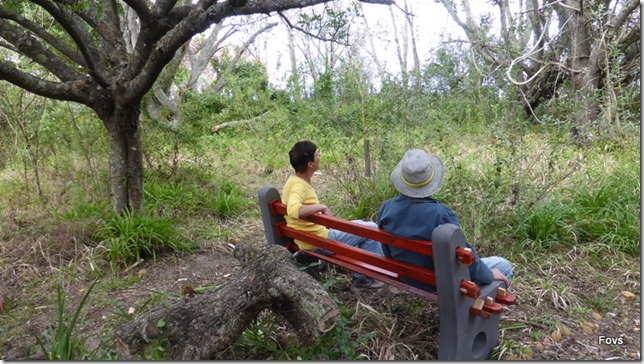 Wednesday was a truly miserable day weather-wise so we decided to postpone it till today which turned out to be a very good idea.

The plan was to secure the other droppers as well and put the shade cloth on for the windbreak. It all worked out quite well and this is the result: 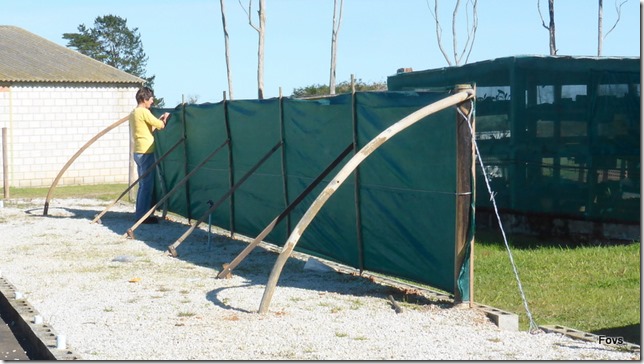 I think the biggest job was the blanket stitching of the shade cloth to the wires, thankfully we ran out of string as Ellie’s hands really got painful. In the meantime I moved some Proteas already from the shade house to the platform to make some space for the next transport.

During the week I also fashioned some slats for Rob’s bench out of some wood donated by Neil and that had to be fitted and varnished. In hindsight the collars are probably a bit of overkill but at least they cover the holes. We took it all apart again and Rob gave it a first coat. Between Rob and the chairlady it was decided to put the bench in a special place in the Arboretum once it is finished.

During the week Tony apparently bulldozed a path near the bird hide to collect some fill for the road so we were concerned and went to inspect it. Thankfully it does not really impact on what we have done and his tracks missed the trees we planted by a hair.

Over the weekend the weather station stopped working and by a process of elimination worked out it had to be the batteries. We replaced them on Sunday and it worked again but it did not want to communicate with the internet. We left it and on Monday night for some reason it started to work again. Time to rig up a power supply rather than use batteries.