A subject you’ll see many times until the Open Day is done and dusted. The preparations have been going on for a bit and now they have started in earnest by getting stuck in at the nursery with sorting and weeding and spotting.

In the meantime we are still bringing in plants from home and the shade house is now full to bursting at the seams. We are already making  good use of the weed guard we acquired the other day. We put a strip on the platform under the Proteas and it looks very good and almost professional. Whilst moving the plants from the nursery to the platform we also pull out the weeds and put paint spots on for the pricing so this section is almost finished except for the signs. 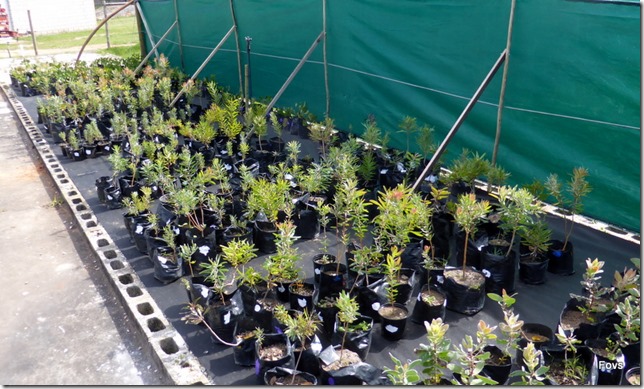 Moving the Proteas has opened some sections in the nursery so we also put some weed guard there too and started sorting out there as well.

Somehow we managed to spend half an hour in the Arboretum as well just to relax, we saw some nice Babanias, Pelargonium grossularoides and Veltheima brachteata there. Pity we get so few “workers” as conditions were ideal to pull out weeds after the recent good rains.