At the moment it is heads down getting the nursery in order and propagating/potting stuff so there isn’t anything interesting to blog about our activities on Wednesdays.

I noticed that our weather station had stopped communicating with the internet and that bugged me so much that we just had to go out yesterday to find out what happened and it was also a good opportunity to take another trailer full of Agapanthus and Protea we had potted up at home. Turned out it was the same issue as last time, flat batteries. I really must sort out a power supply for it when I have nothing else to do for Fovs.

We were determined not to get sucked into doing work, difficult to do when there is so much outstanding, and instead enjoyed some of the things we have instigated.

It is a good time of the year to wander around with a lot of spring flowers out so we just strolled along the Nymph Trail doing lots of flower sniffing and figuring out where some of the places we have read about in the recently discovered admin files where located. 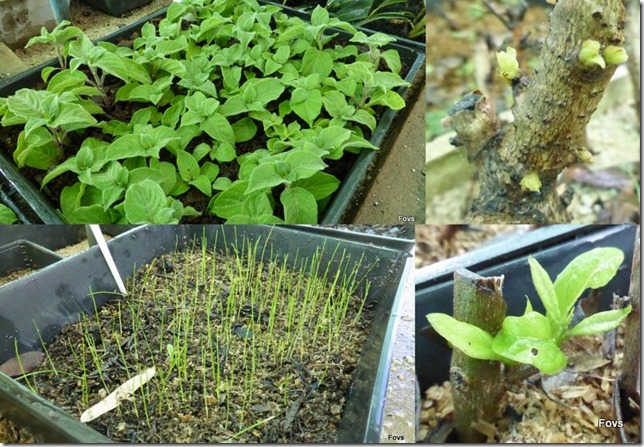 First stop though was the misting house where Ellie was quite chuffed to see the Sterculia cuttings sprouting out and some of the seedlings doing really well. We need to expand our capacity there a bit quite soon if we want to propagate more cuttings and seed.

Near the Lilly Pond which we now know is actually Dodds Dam we found some interesting trees. 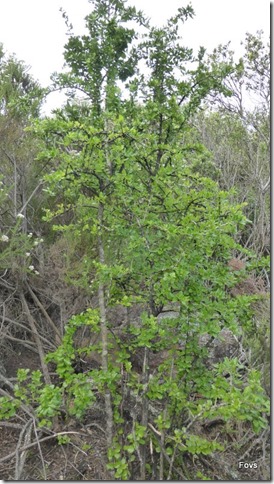 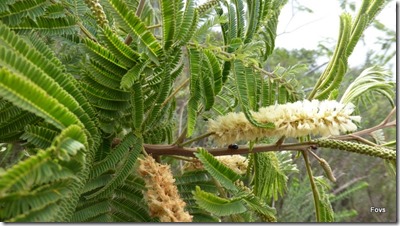 We also spotted some fingerlings in the dam so Neil’s efforts have not been in vain. While doing that a large flock of Drongo’s congregated around the bird hide, quite a lovely sight. 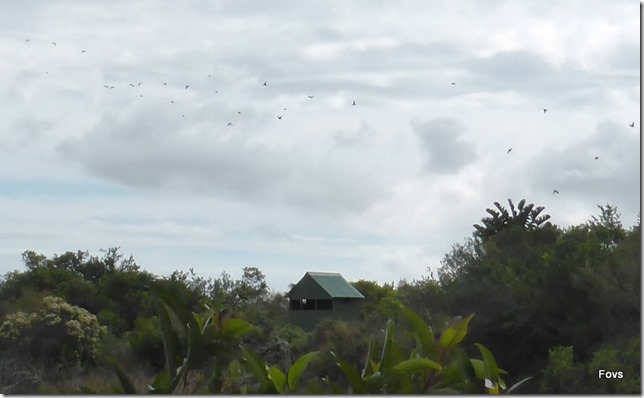 The path along the Big Bang back to the parking area now looks great after the mowing and other maintenance for the Open Day, a pleasure to walk it!

It was a whirlwind of activities today with the main focus getting the nursery back in shape again after the sale. Of course the other chores do not stop so Rob and Cathy attended to this month’s section of the hacking program while Jenny looked after the trees in the Arboretum.

In quick succession these were the items on the list which were done:

To our surprise and delight two chaps from Working for Fire offered to help us and they collected 10 marsh plants from behind the house and then proceeded to dig up the rest of the vibracrete panels in the old spray area. We now have a nice pile to use to replace the rotting pallets in the shade house.

At teatime we discussed what needs to be grown and propagated in the near future as the sale put quite a dent into our stock especially the trees.

Late in the afternoon we still went for a quick collection trip and enjoyed the many plants coming up in the burnt area, amongst them these two: The alarm went off rather early to be at Van Stadens in time to do all the usual things such as putting the tables out, banners up, organizing stalls etc.

First off were the runners, there were about 120 of them and the comments afterwards were very positive. Perhaps the ideal weather after a week of a lot of wind helped with that. The cyclist had a smaller turnout than before, there are a lot of events lately and our tracks are too easy for the average riders even though for the toughies there was the possibility to go ride at Woodridge. Still, it brings in more potential customers.

Pre-nine o’clock we had our usual early customers but our wheelbarrow drivers were not there yet so we had a good reason to stick to the official opening times. Soon though we had a steady stream of people coming in which was different from previous years as then we had definite peaks and valleys. Our stall holders were very happy with their turnover as well. 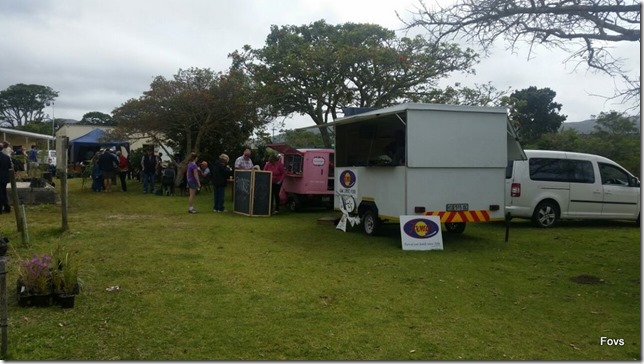 Ellie’s usual persistence had paid off and for the first time in 26 years we had a councillor, Mr Bongani,  visiting us and giving a speech. This was a welcome boost for the staff. 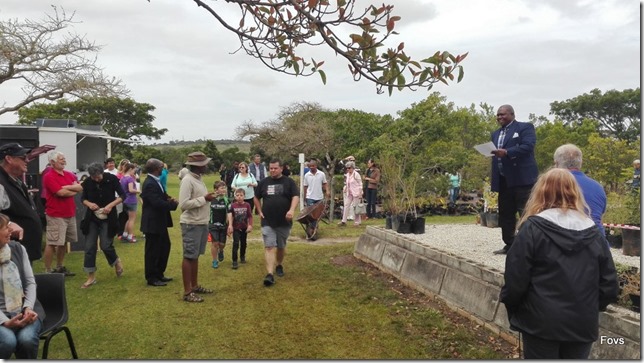 To mark the special occasion we got Mr. Bongani to plant a Scotia in front of the conference center. All in all we can look back on our most successful Open Day yet. It will be quite a job to replace all the plants sold but we are all motivated to do even better next year.

Tomorrow is the big day and now is the time for the cut flowers. We went to the mountain to collect some P. cynaroides but the flowering season is late this year and there was also some evidence that illegal picking has taken place. We still managed to get a nice variety of of Leucodendrons as well.

Back at the nursery the others had collected mainly Leucospermum so now it was time to make pretty posies. 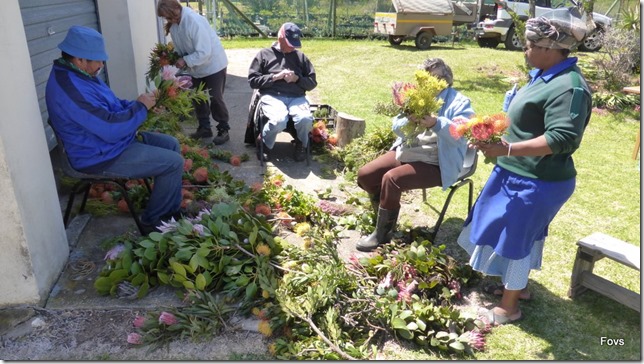 Heunis lent a hand as well and proudly shows off her handiwork together with Jenny. When all was done we had a colourful collection in the greenhouse in the trough we made specially for the occasion.

We still moved some more Proteas and got most of the furniture ready. 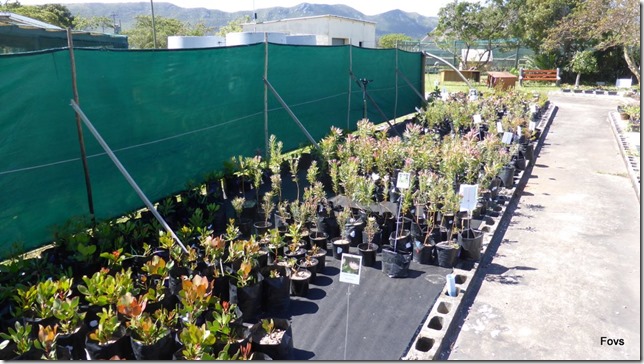 Our monthly meeting was totally focused on the preparation for the Open Day and thanks to the excellent turnout and everybody pitching in by teatime all plants were sorted, dots were painted, name signs put in their places etc.

For a while we have been concerned about plants disappearing so as a deterrent we put a gate at the entrance. I gave Neil a hand with this before disappearing to the Arboretum as the paths were getting rather overgrown. It took me the whole morning with the brush cutter so I missed out on all the fun and even was too late for coffee.

Thanks to the hard work by the team there was time to go for a stroll and see some of the pretty plants and sights. 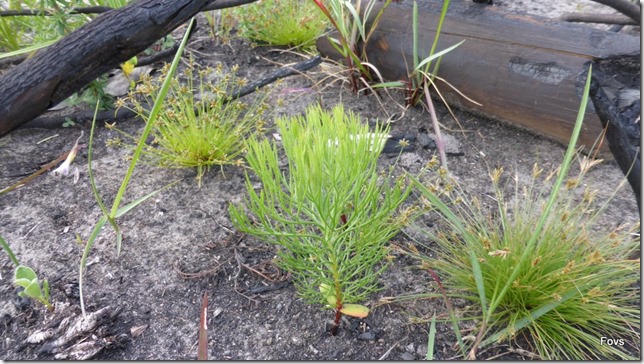 The Paranomus are growing nicely Of course we can’t leave the Pelargonium out. 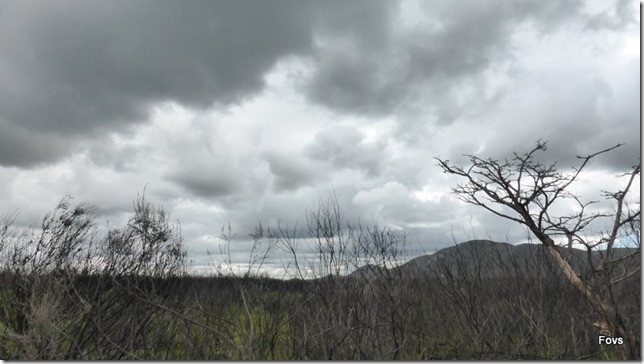 The skies looked rather threatening.