With the temporarily demise of our weather station (making good progress fixing it) we are not quite sure how hot it was, it must have been close to 40 degrees. Rob and Keith went out hacking anyway but came back early as it was unbearable. Good time for Cathy and Ellie to take some trays of seedlings out of the misting house and plant them up.

I had prepared some more brackets and got some wood to replace the badly rotted wood holding the fibreglass sheets in place and the misting house was a good place to be working. Thanks to Ellie’s help it went much quicker than last week to put the brackets on and soon I was busy putting up the shelf and fixing the sheets. Pity this is now covered with plastic so you can’t see anymore how perfectly straight it is.

In the afternoon Rob painted his garage door lock, I put a hose pipe connector by the watering drums, collected some Elaeodendron zeyheri —small-leaf Saffron seeds and on the way home got six bags of sawdust from the sawmill for the seed trays.

Our first Wednesday of the New Year and back to working away at the Reserve. Already the first New Year’s resolution of taking it a bit easier broken as it turned out to be quite a busy day.

We started off with some chemical warfare against whatever is eating the seedlings in the misting house and Ellie put up five stations with snailbait and also sprayed while the misters were off for the entire day.

She also sprayed the Aloes in the nursery with Oleum for scale.

I had prepared some brackets to start replacing the brandering holding the sides of the misting house together and put those in place. Turned out to be a bigger job than I had anticipated.

So far so good: 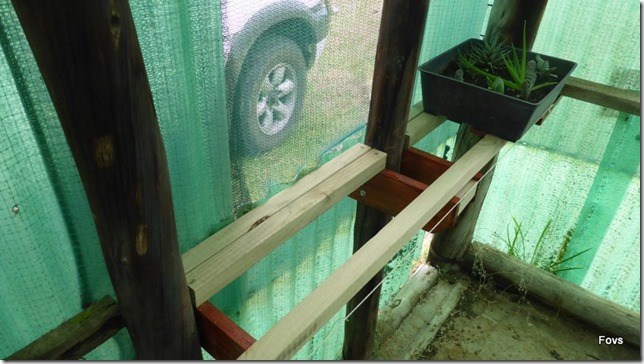 It will also be a good place to put trays to root Hawortias etc.

I noticed on a previous visit that the spekboom in the nursery were hardly visible because of all the “companion plants” so after tea I got stuck in doing some weeding while Ellie and Rob went to collect some Strelizia seeds on the Nymph trail and check if they could spot some Tilapia in the dam. Nada, unfortunately.

On the December walk with Samantha, Noxia , Tammy and Ellie saw that a short section of the Link Trail beyond the bridge was totally overgrown so after lunch we went and sorted that out. Rather exhausting in the heat but it looks a whole lot better now. Along the trail it looks like quite a few Proteas did not survive the drought.

Back at the greenhouse we cleaned up some broken glass and did some more weeding.

In spite of the drought the nursery looks in much better shape after Christmas than previous years thanks to the staff maintaining a good watering regime. All our hard work on the pipeline is definitely paying off!

Over the holiday period our website and blog has been moved to a new provider and this is the first posting to check if our blog is still alive and well.

We planned to welcome the New Year on top of the mountain, unfortunately the weather up there was so foul that we decided it would be more of an endurance test than fun so we beat a retreat.

The pics don’t do it justice but it really was blowing up there.