Good use of new bankies

Today can be summarized in one sentence, plumbing, weeding, planting and talking.

We hadn’t seen the staff for a while so Ellie needed some catching up with the happenings at the reserve. We were impressed that the new garden at the parking area was nicely weeded, the grass in and around the nursery was impeccably mown and they were busy doing the edges of the path from the office to the Fovs room!

My first order of duty was the fixing of the broken sprinklers and also to add stopcocks to the sprinklers on the platform so we only use them when working for water store their trees there. These days I’m making sure that the risers are protected by a decent creosoted pole so hopefully the mower will keep a respetful distance.

After that it was the usual effort to move sufficient plants out of the shade house to the general nursery to make space for Ellie’s endless supply of new plantings and pottings. We found a good place for most of the Cussonia and Podocarpus. Weeding remains a problem as no sooner has one finished the one end of the shade house or one has to start over at the beginning. One can notice though that autumn is here and the Proteas are getting a growth spurt.

Before going home I had a quick look at the inlet for the Tilapia dam and had a nice surprise when I found this little feller.

Amazing little creature as unlike a tortoise it does not retract its head but swivels it sideways and tucks it under.

We’ve had a series of exceptionally hot days lately and, as another one was predicted for Wednesday, we decided it would be better to shift the old fogies day to Tuesday.

It still was rather hot and we tried to find shade in the arboretum to try and get some semblance of order in the area around the burnt out hut. The biggest problem is to get rid of all the burnt branches and other pulled out vegetation. Fortunately Neil was there as well to lend a hand, a public holiday well spent.

After tea some went to collect Proteacea seed in the reserve, Rob carried on to put signs on the dirt bins and I did some more weeding in the shade house. I’ve come to the end and now can start at the beginning again as the sweepings out of the roadside drains we used for potting soil contains a lot of grass seeds.

We noticed some dry areas, both in the greenhouse and in the general nursery and on testing found that quite a few sprays were not working properly and replaced them while the spraying. Did a mention it was a hot day an so it was quite welcome. The worst though was that an unknown person had played the cowboy on the sit-on mower and nailed a few of the sprinklers in the nursery. Expensive prank for us as these are more than R200 each.

The upshot of all this was that we only got away at 4:30 which was not according to plan.

I took some wood home and produced two bankies to keep in the Fovs room as I am tired of hunting the old ones down. Guess which is the old one.

The fab four were present today and apart from hacking, composting all trees in the arboretum and extensive work in the nursery nothing of note happened.

We saw fleeting glimpses of staff but no work was observed.

For our monthly meeting it was decided rather than doing some much needed work to go out and sniff the flowers on the mountain. It is not easy to think of something which we have not done before and is not too strenuous and I came up with a 1km walk to a small peak west of our usual stomping ground.

People found it a little strange to park on the side of the track going up to the towers but that way we could cut out a long boring stretch along the jeeptrack with one short, steep pull-up.

In spite of the drought the vegetation was in reasonable shape and we found a few unusual gems. 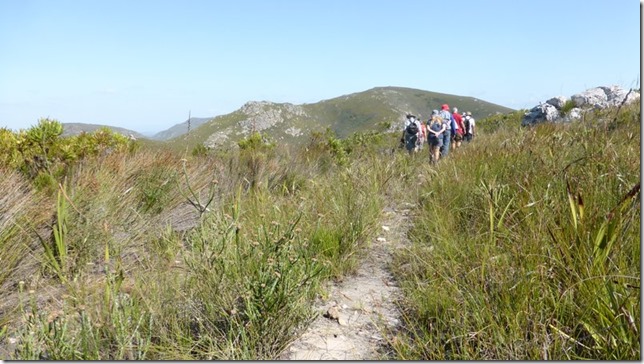 We took Tammy along for her first ‘hike’

This orchid was quite abundant.

On the way back we spotted the Cyrtanthus staadensis in flower.

One must be dedicated to go to Van Stadens even on one’s birthday. Of course I planned to take it easy and ‘just quickly’ put a joiner in the pipe where we made a temporary repair before going to Cape Town

The exercise was easy enough, take rocks off, cut pipe, let water run out and join. Never mind that I got soaked in the process, it was a warm day anyway.

Just next to the pipeline on the neighbours property they have begun harvesting bluegums and they’ve made an almighty mess and and access road along part of the River Walk and down the hill.

Goodman wasn’t even aware of it but he was rather shocked when he went and had a look.

To make matters worse, not long after the pipe was fixed Jenny reported a loss of pressure again and I found that the logging tractor had reversed over our pipe and broken it in a few places. That didn’t make me a happy chappie but there was no alternative but to go out and fix that too. Thank goodness for the foresight to have some spares in the Fovs room.

On a positive note we eventually managed to convince David (in charge of the veggie garden) that his problem was an airlock and all was sorted after installing a release valve on the dam wall behind the braai.

So, as usual, the relaxing day turned out to be a hectic one.