Strange day, got a lot done and yet it didn’t feel like that. Got underway quite early and happened to arrive at the same time as Rob and Jenny who went to Ms White to talk about aliens. Not very conclusive as she does not seem to have a grip on reality.

We cleaned and sanded the table by the Xhosa huts and Ellie proceeded to give it a first coat of Nova14-meranti. Looks promising.

Off to the arboretum to install the fixed bit of pipe

near the nookie. We also checked on the bees and they were gone after the last poison attack.

Filled the big bucket and cleaned another picnic table with Ellie’s secret recipe, I doubt very environmentally friendly and went for tea, this time not in the Fovs room but by Wesly’s bench to commemorate that it has been a year since his passing.

It turned out to be extremely pleasant by the edge of the dam, watching a grebe and a pair of yellow billed ducks. Jenny had picked a beautiful arrangement to put by the bench for the occasion. 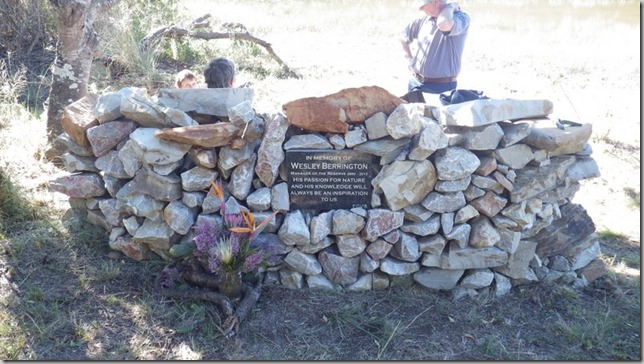 I checked on the float which was still going full tilt in spite of the level being where we want it. There is not enough travel on the arm to close it so I have to either dig it in substantially or lengthen the pipe so it is in deeper water, that’s for another day.

After tea we were a bit undecided and ended up walking the River Walk to put the 2km sign up. Great was our surprise when we found a 2km sign already on the trail at 1.5 km if that makes sense. We seem to be working at cross purposes here and need to talk to Goodman.

We had enjoyed teatime so much that we also had lunch by the bench and it was difficult to get going again but the second bench was not going to varnish itself. Just like last week there was a group of Muslims at the picnic site and they were again most unfriendly, this was compensated by Ben, one of the neighbours near the railway bridge who had come to the reserve to cycle 25km and I made him aware of the new tracks. He was most appreciative and will tell all his cycling buddies.

Last but not least the chainsaw was put to good use cutting the last strelizia  in the entrance circle down. I didn’t think I would be able to spare the pellie patch but thanks to some expert hinging cuts the tall branches fell just where I wanted them. The saw ran out of petrol with five branches to go which necessitated another trip back to the fovs room for a refill and the last branch fell at 15.45 with all cleaned up by 16:30. Probably will get some comment but we think it is a great clean-up and it opens up lots of possibilities for landscaping.

Ellie hard at work cleaning up after me

Dwarfed by the many, many branches

The last one falls, Timber!!