Quite a day (again). Charles from Fat Tracks had promised to be at the reserve at 10:00 for another try-out of the freshly mown tracks so we got off to an early start to paint some benches before his arrival only to find that they were way too wet from the dew. Fortunately I had prepared a piece of wood to fix another bench so we moved the activities there. 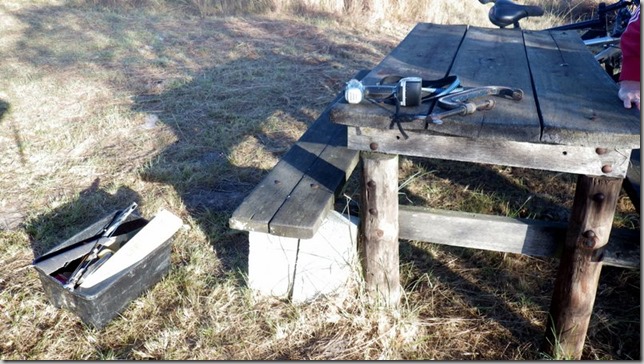 The left hand seat was supported by some cement blocks courtesy of Rob but we thought that seeing we are varnishing the surfaces we might as well fix it properly. Of course the coach bolts were rusted solid but with a bit of oil from our car’s dipstick I managed to get them loose and replace the broken piece of wood to support the seat. Ellie in the meantime applied her concoction to remove the years of accumulated algae and even though the fixing took longer than anticipated I still had time to go and fill a 25l drum in the arboretum to rinse the table off.

Charles had decided to cycle from PE to the reserve and he arrived a little later than planned and we set off on the tracks. It was quite difficult going with the soft soil after the rain we’ve had. The tracks got the thumbs up and we must now decide on some combined routes and signposting.

Charles left and we wished him good luck getting back to PE in the stiff easterly breeze and we chatted to some people who had just finished doing the River Walk before brewing some coffee in the arboretum. Ellie then put the third coat on the two picnic tables on the main site while I loaded the bicycles again. We still had a little time left before lunch so we went to the fixed table to check if it had dried enough for the first coat and, except for the seat which had been in the shade, this table was also done.

Off to lunch, some chatting, some flowers in the shade house and then armed with the chainsaw to the entrance circle to cut the last strelitzia stump. We were most astonished to find that it had already been done so we could start some plant rescue and reshaping of the rockery.

Another surprise, at 3:00 Neil arrived to give us a hand and he got to work quite ruthlessly to chainsaw a large rhus shrub on one of the mounds. We now have a good view of the whole circle and the ideas are solidifying. Luckily when we were on the way to put our tools back in the Fovs room we noticed that Goodman was still in the office and that gave us a good opportunity to discuss everything with him and the students. This necessitated a site inspection so we trundled back and explained everything to them. They all got quite enthusiastic and we have a commitment from Goodman for assistance with rocks and soil and, above all, labour!

Quite satisfied with the day’s varied proceeding we had one final cuppa in the Fovs room and got outta there at 16:30.