It takes discipline to maintain a blog, if you don’t do it right away it tends to be forgotten. Not that it matters, the one and a half people who read this and don’t post comments won’t mind anyway.

So, back to Wednesday. I had made a platform for our trailer so we could take a double decker load of plants back to the nursery.  Ellie has been re-potting like crazy, she finds it easier to take soil and plants back home and do it in her spare time rather than “wasting” it on a Wednesday.

First thing though as we arrived I pruned the Pelargoniums at the entrance circle so I could take cuttings, plant them in trays and put them in the misting house. We were pleased to find that the heating element was still working and our fish tank thermometer showed 24.5 degrees which is ideal. Between Neil’s tray of Clivia seeds and Patrick’s tree cuttings the misting house is filling up very fast.

While Ellie was doing the offloading I fixed the loose plank and safety sign at the greenhouse and watered the succulents there. The greenhouse is in need of some reorganizing though, perhaps next time. 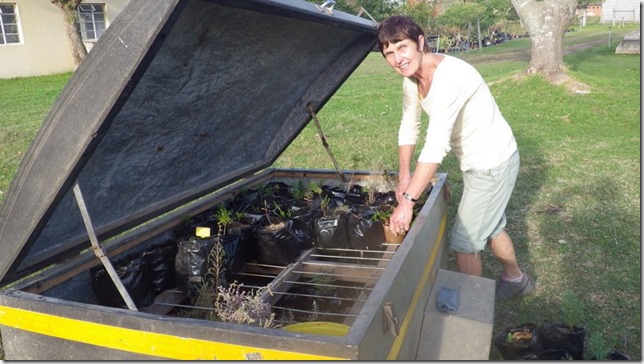 The alien crew joined us at teatime, afterwards they (Rob, Cathy, Keith) proceeded to the main picnic spot to do some serious ringbarking of bluegums while we fixed the Dell pipe properly, planted some Leucodendrons and Zantedeschias before going to the arboretum to do some cleaning up.

Lastly we returned to the nursery to help Rob to protect the Strerculia from porcupine predation and to locate the camera to see if we can get a better picture of the critter. The arboretum looks quite pretty at the moment with the Ericas flowering but further has quite a wintry look.