Time to catch up as blogging hasn’t exactly been number one priority as far as Van Stadens is concerned, there was little positive to report.

Take last Wednesday, we removed the tree that had fallen on the overhead pipeline, in doing so I broke the support wire, managed to fix it, added a lot more cable ties for extra strength. We had also carried a long ladder down to sort out the sagging bit at the river crossing, it was just long enough and by balancing precariously against the pipe and violating all safety rules managed to sort that out too. It did not make one drop difference in water pressure and we found out why when Rob returned from his introductory visit to the new owners of the Gibson property. He had followed a stream which crossed the entrance road to the field where the source of this stream became evident. A sizeable wattle tree had grown over the pipe and its roots had obviously badly damaged the old cement pipe. 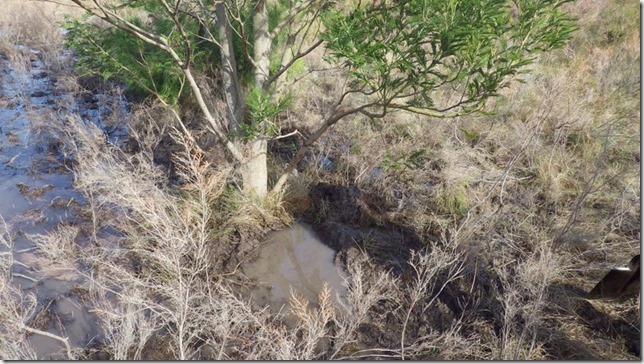 At last the reason for the drop in pressure I had noticed for a while was now evident, in fact it is quite amazing that we had any water at all in the Reserve.

It looked like quite a job to fix it and not one I was particularly keen to tackle but thankfully Rob and Neil were prepared to help so it was decided that Ellie and I would go to the start of the pipe, open the manhole and close the stopcock. This we did and, even though we did not have the right equipment, managed (or so we thought) to close it.

Back at the nursery checked on the misting house only to find that last week’s adjustment had been a bit too much, plants were rather dry and hadn’t developed much and then when I wanted to water the succulents in the greenhouse with our hosepipe and soft spray I found that the attachment on the tap had been stolen. At this stage the enthusiasm for Van Stadens was running at an all time low.

Fast forward to Sunday… The plan had been to tackle the repair on Saturday but the weather was just too bad so Sunday morning Rob, Neil, Ellie and I gathered at the entrance gate to Gibson’s property (we will have to find a new name) and met some of the staff there who were quite helpful and friendly. They told us the water had been running for more than a month and they had reported it.

We marched to the leak and found that the water was still streaming as fast as it had been, obviously we hadn’t managed to close the stopcock properly. Nevertheless we got cracking at digging the tree out, uncovering the pipe and digging a gully for the water to run away, quite a muddy experience! Off to the manhole again, this time with the correct spanner and managed to give it a few more turns. This slowed the flow considerably but not enough to be able to close the hole. Only when we disconnected the pipe closer to the reserve to release the back pressure did the flow stop and now we felt confident enough to carry our box, concrete, mixing drum the considerable distance from the car to the leak and proceed to do the repair. Fingers crossed for Wednesday when we will switch the water back on. 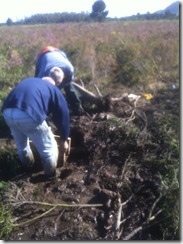 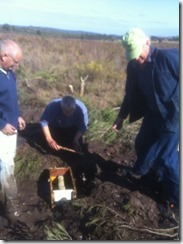 The whole process took quite a while, from 9:00 to 1:30 so the late lunch in the FOVS room was most welcome. Afterwards we went for a first gear only drive through the reserve to enjoy the fabulous fynbos and chat to some visitors who were doing the same thing but much more energetic on their bicycles so our enthusiasm for Van Stadens was restored.