New Year’s eve was treated like just any old Wednesday which meant that the usual group assembled in the Reserve. Rob,Cathy and Keith tackled some hakea in sector ‘January’ of the Invasive Species schedule.

This is quite an ambitious program and Rob will need all the help he can get, perhaps a few more of the now more than 160 friends on Facebook could come and pitch in.

We were a bit hamstrung as we were looking after our granddaughter so most of the time was spent weeding. Here she is supervising Ellie. 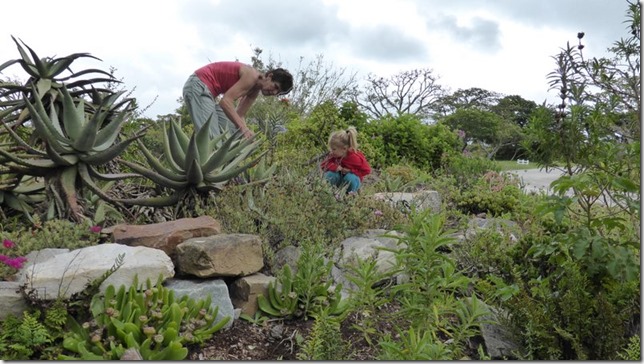 Later we hiked to retrieve Rob’s camera, after the good pictures of the baboons there hasn’t been much activity. From the vantage point we had a good view of the gorge and it is good to see the result of Working for Water’s efforts as the trees are definitely dying. In the afternoon we moved to the arboretum to check up on the trees and do some more weeding. Tammy was very intrigued by this tortoise.

On New Year’s day we visited Jenny to collect some bigger trees which didn’t fit in her car anymore. I had expected five or six but we ended up with 23 in our trailer! We drove quite sedately and all 23 found a good spot in the nursery and next week we will plant some.

In the meantime work is progressing on the log bench. Quite a change from the usual fiddly woodwork to be juggling big logs.