The usual trailer full of plants got taken but before we could organize the shade house we first needed to install an extra irrigation pipe in the “lean-to” section. This was duly done, complete with 180 degree nozzles so now we can utilize the full shade house and, more importantly, group like plants together.

It was quite a job carrying bags and pots to and fro in the meantime weeding as well but the result was quite satisfying, it almost looks like a “real” nursery now.

Whilst doing that Tony came up to me asking if I wouldn’t mind putting a few screws in some school benches as I am so much handier than he is and I fell for the flattery and agreed to take them home to sort out. As usual it ended up being a much bigger job than I had anticipated, the perfectionist’s curse. 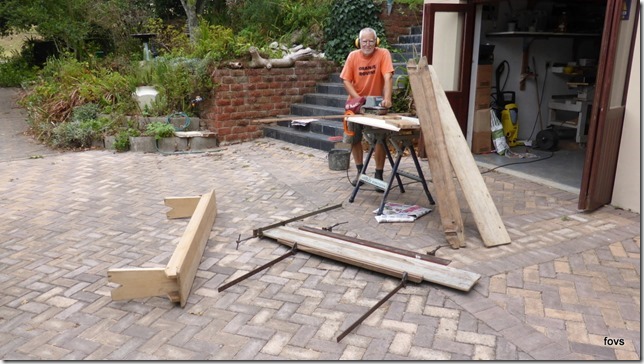 Some sanding, some gluing and some varnishing saw them as good as new. On arrival we had noticed a water pipe sticking out of the ground near the braai and connected to “our” water pipe. This was reason for concern so we followed the pipe and this led to a new veggie garden by the school. Turns out that the Van Stadens Wind Farm is doing a community project and spent quite a large budget on fencing, drip irrigation etc. We now knew why Goodman had asked if he could tap off water for a few trees near the school and realised we had been hoodwinked as this will be a major drain. Needless to say some harsh words were said when I saw him. Whether it made any impact I don’t know.

To round it all off I quickly had a look in the misting house only to find that the misting valve was stuck in the open position and our cuttings were drowning. No choice but to move all the seed boxes to the greenhouse and to dismantle the offending plumbing. It was a miracle that it has worked for so long, the metal joints were so corroded and clogged that there was only a pinprick left and the valve full of rust particles. No choice but to replace.