Full program today and on top of that we also had a phone call they would deliver the new benches so instead of our usual first delivery to the nursery we went straight to the arboretum to prepare for the installation of the water pipe. This went well so we were back at the nursery in time to take delivery of the three new benches at ten, oil the stubborn door to Rob’s garage, offload the trailer and make space in the shade house.

After coffee break we all five got the black pipe and started shoving it into the old 50mm pipe. Didn’t start off well as we hit the first blockage after 3m and then another 3m but thankfully it was clear after that. It was great teamwork as it was further than I thought and we needed all the pushing power.

Later on we glued the connectors etc. Pity it has to set for 24 hours so we can only test it next time and then we also want to do the same to the eastern side.

Back at the nursery Goodman had just arrived from doing a survey at Colchester so we had a chat and he asked if I could have a look why Tony had no electricity in his house. Well, with the old wiring, multiplugs and suspect breakers it could be a bit of a challenge I don’t really need. Of course a good moment to tell him to get us more potting soil and also put the benches in their proper places complete with concrete foundations.

Finally I took a few pics of the cycad by the fovs room as it looks very good at the moment. 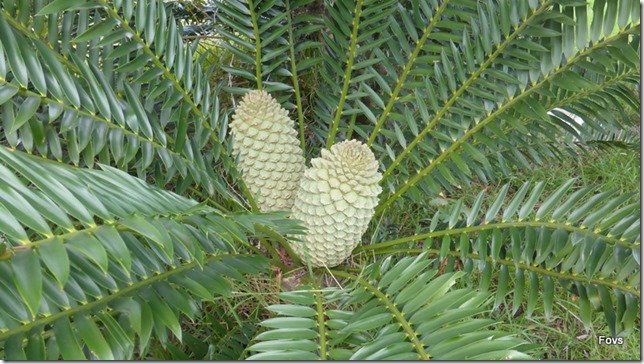