One can dwell on all the damage that the fire has done, all the signs gone, the bird hide gone, our water supply gone, picnic tables gone, some of the planting burnt etc. but that is pretty self-defeating so we try to look for the positives and the opportunities this new situation brings. For the past few month we have tried to trace the old Boulder Trail along the western boundary. Once it was one of the more spectacular trails in the Reserve but Wesley closed it down after some people got into difficulties. It was now very overgrown and we did not have the time and the resources to open it up again. Well, the fire did it for us and it was very exciting to figure out how it went amongst the still smouldering anthills and pine tree stumps.

The cycads along the way looked rather desolate but they will recover. There are still quite a few burnt sticks to be negotiated so we turned out pretty black. Though the path is a little exposed in places it offers some spectacular views across the gorge and to the river below. It would be a great addition to the perimeter trail between the River Walk and the Link Trail and also provide better access to control the wattle, pines and hakea on these slopes.

The trail winds it way down to the river turning into a bit of a dead end so we climbed upwards to the Lookout picnic area which would fit in better with the overall layout of the various trails. We also had been looking for the trig beacon which is somewhere in the Reserve but due to dense, impenetrable bush have not been able to find it. Well, now it was a breeze, The vane was lying next to it, so I fixed that and I think with a lick of paint it could be a nice landmark, These beacons are now obsolete but people are trying to preserve them so why not. 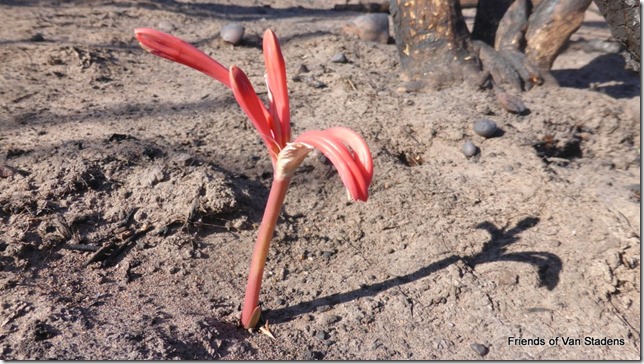 We are also looking forward to see the vegetation recover and following their progress just as we are doing with the Paranomus in the Arboretum. Just eight days after the fire we saw the first fire lilies and that with no rain at all.