First plan of action today was to connect the water to the two-inch pipe we discovered at the old nursery and we were very pleased when we arrived at the reserve to see Rob already there. After a brief chat he disappeared to work at digging the pipe in between the fences on Gibson’s property on what we now call “our path” whilst we used my heath-robinson connector made from an old glue container to connect the pipes. We also put in a stopcock be able to switch off the water at the old nursery because driving around to open and close the far stopcock is getting a bit tiresome and also time consuming.

After having done just that and disturbed the fieldmouse who has made a nest in our manhole on the servitude we walked the suspected route looking for soggy patches but no luck so the digging at regular intervals to follow the existing pipe was in order. 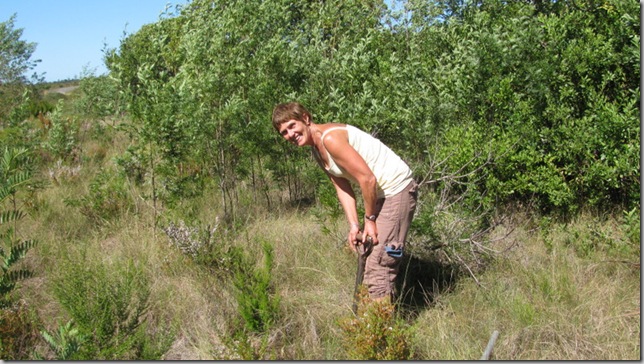 At least Ellie seems to be enjoying herself, appreciating to be able to be out here in these wonderful surroundings with wonderful company, lol. Looking at this you can see the terrain is quite daunting. The crew which laid the original pipe must have been drunk, our marker poles were never in a straight line, even so we were puzzled, frustrated and tired when by lunchtime the pipe seemed to disappear under the road and we could not find where it continued so we decided to go and pay Rob a visit.

We thought we had worked hard but he put us to shame when we saw how far he had already covered the pipe, nearly to where the fallen trees blocked the path. Rob said the wrong thing in that he didn’t think we could cut the trees with his small handsaw so of course I had to prove him wrong and cleared the path in a jiffy.

It was lunchtime and also time for Neil to arrive so we walked back to the Xhosa huts and had a good lunch with hotdogs and caramel cake.

Neil had brought more pipe so the the piece we had shoved through the metal pipe last time and was just too short was duly replaced but when we connected again there was no water. This mystery was solved when we drove back to the main stopcock and found that last weeks connection had become undone, proof that it really needed that missing clamp.

All sorted, return to old nursery, connect to old pipe and drill a pilot hole near the start of the river walk, yippee.

We made the connection at the far side of the old driveway and we had to dig quite a trench to bury the pipe there, major earthworks (for us at least) We were a bit disappointed that we had not gotten as far as we had hoped but on sober reflection and after a well deserved cup of coffee with the sun setting behind the mountains we could justifiable be proud of what was achieved today. 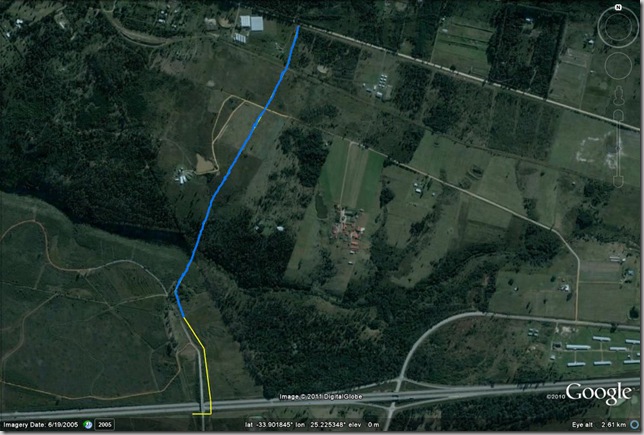 If you consider where we have come from and where we have running water now (blue) it will not be too long before we have to catch a rat to take the pipe underneath the freeway for us and do the last bit to our destination.