I indicated previously that the number of unfinished jobs on the line was getting a bit out of hand so today we concentrated on finishing a few things and the old nursery was a good candidate. Ellie and I arrived quite early and we dug the first section of pipe in and used the rocks we dug out to cover the join at the start of the path down. Rob and Jenny then joined us and we carried on uncovering the old pipe and putting the new pipe in its place. 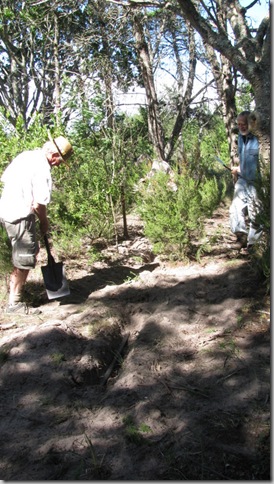 Lucky for us the soil is very sandy there so we made very good progress, in fact by lunchtime the job was done and we carried on trying to find and unblock the section along the road. Digging and finding the pipe is a lot harder there, we managed to find the join in the smaller pipe and the place where it disappears under the road though. We suspect that is where the connection to the old tap is, something to follow up at a later date.

We tried to shove a section of new pipe into the old pipe but it got stuck and found that the old pipe had filled up with mud so until we can wash that out there is little hope for success.

Jenny and Rob then left and we went to investigate where yesterday’s leak might be and we did not have to look for long. Near the Gibson’s stopcock the glue in the reducing bit of pipe had become undone and water was pouring out. 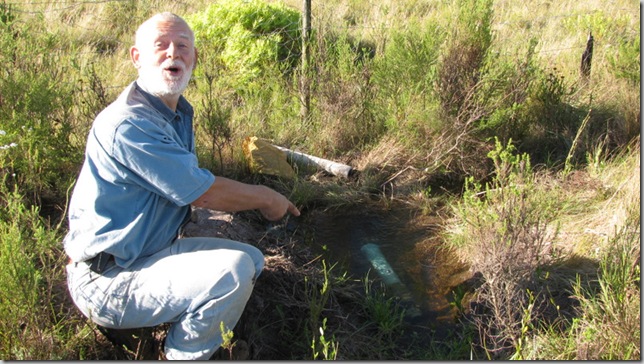 We closed the main valve and the water drained quite quickly so we could take the pieces off to take away and re-glue. This was quite difficult because of the black sticky stuff we had sealed the join between the pvc and the asbestos. All in all it got quite late again.